SUMMARY FOR PARENTS WHO HAVE NO TIME TO READ (ALL OF US):

The other two strollers are completely overpriced, don’t have half the accessories or features of the ZOE stroller, and technically they cannot fit into the overhead bins on ANY airlines (it’s like they are lying or maybe the rules changed on them??) whereas the ZOE XL1 technically qualifies for the carry-on luggage dimensions/size for 6 major airlines (6 more than the Mountain Buggy Nano and GB Qbit Combined). See my chart below. The facts say it all!

Plus you can pick out super cool color combos with the ZOE XL1. You get to basically design your own stroller. Can you tell that I’m biased? haha

SUMMARY OF SUMMARY: The ZOE XL1 is the only stroller I could find that ACTUALLY can be technically allowed to be a carry-on bag on an airplane!

Here’s the story of my search for the best lightweight travel stroller that can be used as a carry-on bag on an airplane!

Ok so I have an upcoming trip to Disney with the kids and I started to think about how awesome it would be if we had a stroller that could be a carry-on and just fit into the overhead compartment of the airplane when we fly to Orlando in January. It seems so nice and would save us a few minutes when getting off the airplane and it would just be nice to not have to put my nice new lightweight “travel” stroller into the dirty underbelly of the plane. We all know that germs and nastiness are everywhere on planes, but I guess it just gives me more peace of mind if I could have my stroller with me. I mean who wants to have a sick kid at Disney!

Anyways, the search was on. First of all something I didn’t know and you should know is that not all airpline carry-on bag size standards/requirements are created equal. For the most part, they are all actually different! There’s a chart below for quick reference. Updated April 25th, 2019. You’re welcome!

Back to my search. I immediately found the Mountain Buggy Nano. They show Instagram pictures of moms and dads using their stroller as carry-ons which was great! So I started looking at the dimensions and length and width looked ok, but then noticed the depth and it triggered an alarm. I thought “I think I remember the size requirements of the carry-on bag depth being smaller than that.” but I kept reading because I figured I remembered wrong. Come to find out after doing more factual research, the Nano does NOT qualify to be a carry-on bag on any major airline as of November 11th, 2015 (the day I conducted this research).

Ok wtf!? So I guess all these parents are sneaky and got past the airline employee checking them in? When I thought about it, the airline wouldn’t check the size of your folded stroller at check-in before you waled into the actually gate unless you told them you were going to put the stroller in the overhead compartment and we all know that you can fit a bigger bag in the overhead compartment than you can in those weird little carry-on metal size-checker bins by the gate door.

So if you’re into trying to break the rules, I’m sure you could wheel any of these three strollers into the gate as if you’re going to check them plane-side and then quickly fold them up, put them in the travel bag (which comes free with the ZOE XL1 & GB Qbit, but costs $25 for the Mountain Buggy Nano btw) and then try to walk on the plane with the stroller and put it in the overhead. Some people like to break rules and some other don’t. For liability purposes among others, I wouldn’t suggest doing this. So the consensus on the Nano was that it’s basically falsely advertised and they are basically promoting the fact that people are breaking the rules. Kind of weird and disturbing if you ask me!

So then I went and looked at the QB Qbit stroller to see if it could fit in the overhead compartment. The GB (Good Baby) which really doesn’t say much of anything about the stroller. I ended up on several websites and then finally the Babies R Us website where it says (maybe “said” after this article circulates) that GB Qbit can be used as a carry-on bag on “most” airlines. Great I thought! Just to double check, I looked at the dimensions and saw the exact same issue as the Mountain Buggy Nano, the depth of 19.3 inches seems way too big. It’s basically a big square. So come to find out AGAIN, you have a company that is falsely stating that it can be used as a carry-on bag on “most” airlines. The GB Qbit technically qualifies to be a carry-on bag on ZERO airlines that I researched, which is basically all but Zimbabwe Air or all the super random small ones. Again, be sneaky if you want. No prob. But I don’t recommend it.

Lastly, I researched the ZOE XL1 stroller. I first saw the stroller on Amazon and there was a ton of Questions & Answers on Amazon where they mostly answer the questions directly. I saw one Q&A where someone asked if the XL1 can fit in the overhead compartment of an airplane and be used as a carry-on bag. The answer was Yes! Cool. So I headed on over to the ZOE website which was really cool and super informative.

On their website I learned a bunch about this awesome stroller that really made me fall in love with it, but most importantly to my search criteria I found the dimensions of the stroller. When I looked at the depth, it was only 7″! Wow, this think folds super compact! That’s like half the depth of the other two strollers! So then I took the dimensions and put it into my chart below. I was extremely surprised and thrilled that the ZOE XL1 DOES technically qualify to be a carry-on bag on 6 different major airlines whereas the other two strollers did not qualify for one! One of the airlines happened to be my airline of choice!! Woo hoo!

After researching more about ZOE strollers and about the company in general (they are brand new) I am sure this is the stroller that I’ll be taking to Disney early next year! It’s not the absolute perfect stroller (that simply doesn’t exist) but it has so many really great features and I’m sure will make a really great travel stroller on many levels. Plus I was able to choose a color combo that I really love!

So with all of that being said, make sure to check out my chart below! The facts really speak for themselves. I hope this helps any of your Moms and Dads out there that had my same question. Hopefully it helps you save some time, which you can spend with your kids instead! Safe travels!

Here’s a cleaner picture version that you can hopefully see good on your phone:

Update: I also just found the BabyZen YoYo. It actually does truly fit on some airplanes as well. Looks like a cool stroller, but has like zero features compared to the ZOE and is WAY overpriced in my opinion. Just my thoughts. 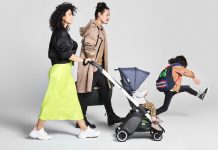 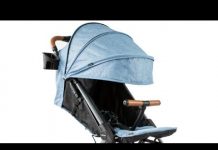